The Laboratoire d'Astrophysique de Bordeaux (LAB) participates in the International VLBI Service for Geodesy and Astrometry (IVS) as an Analysis Center. One of the goals of the IVS is to maintain the “International Celestial Reference Frame” (ICRF). The ICRF is a catalog of VLBI positions of several thousands extragalactic radio sources which are used as references in the sky.
Although these sources show very compact radio emission, they are however not prefect fiducial markers on the sky. They can exhibit structure on VLBI scales, and their position can fluctuate over time. For this reason, all ICRF sources are monitored on a regular basis in order to track variations in position and structure.
In this context, one of the contributions of the LAB consists in producing VLBI images of these extragalactic radio sources and to assess their structure.

2. The Very Long Baseline Interferometry (VLBI) technique
2.1 Concept and description of the technique 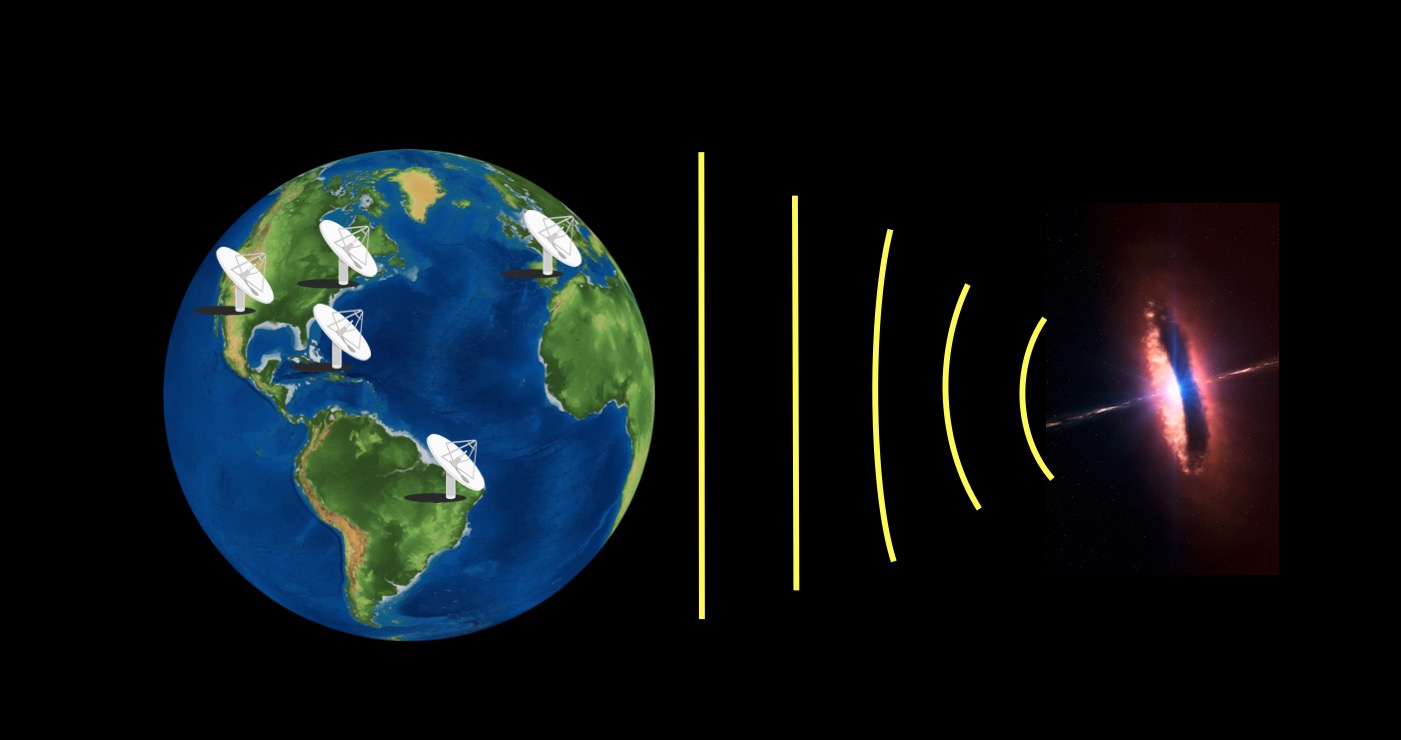 Illustration of the VLBI concept (Credit: A. Collioud / BVID)
The radio interferometry technique consists in combining (correlating) radio signals received by a network of radiotelescopes observing the same radio source at the same time. The resolution of the interferometer and therefore the precision of the observations increases with the distance between the radiotelescopes.
With the Very Long Baseline Interferometry (VLBI), the distance between radiotelescopes is typically intercontinental and extends to several thousands of kilometers. This makes VLBI a unique technique to image the observed sources in their finest details and to position them in the sky ultra-accurately.


2.2 The VLBI measurements
2.2.1 For geodesy and astrometry
The primary observable for geodesy and astrometry is the difference in the time of arrival of the radio source signal at two antennas. This time difference is called time delay or more simply delay (τ). This delay depends mostly on the relative geometry between the radio source direction in the sky and the baseline vector formed by the two antennas. It also depends to a lesser extent on other contributions like the atmosphere, the instrumental errors, etc.
By measuring and modeling the delay for each baseline of the network, one can precisely infer the position of the observed radio sources in the sky, the position of the antennas on Earth, and the orientation of the Earth. 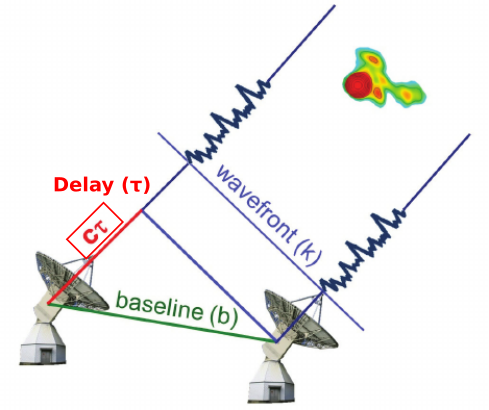 The delay τ is dominated by a geometric component (see the illustration in the VLBI technique section). The other contributions originate from:

Proper modeling of each of these components allows one to precisely estimate the radio source positions, the antenna positions and the Earth's Orientation Parameters (polar motion, Earth's rotation, precession-nutation).

The most accurate VLBI observable is the phase delay which is defined as:
τφ = φ / ω

where φ is the fringe phase and ω the angular frequency (ω= 2πν, where ν is the frequency).

The phase delay however is ambiguous since the phase is only known modulo 2π. On the other hand, the group delay which is the derivative of the phase delay with respect to the angular frequency (∂φ / ∂ω) does not suffer from such ambiguities, although less accurate. It is the primary observable used for geodesy and astrometry.
In practice, the group delay (or bandwidth synthesis delay) is determined by fitting a straight line to the phases measured at several discrete frequencies, as shown in the figure below. The RDV sessions usually comprise four such frequencies at X band (e.g. 8366, 8446, 8806 and 8926 MHz) and another four frequencies at S band (e.g. 2241, 2271, 2361 and 2381 MHz). 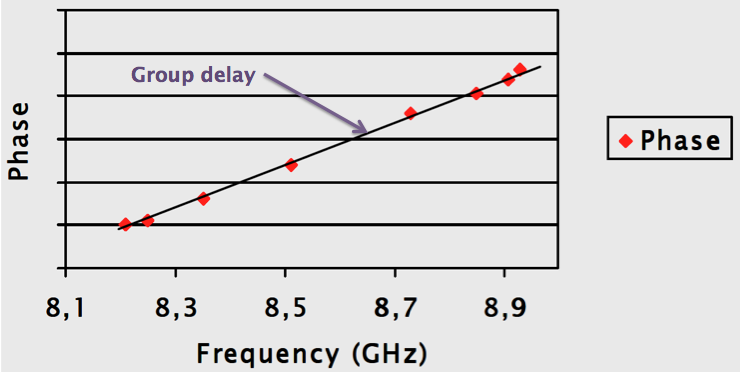 Fit of the measured phases at 8 discrete frequencies at X band to determine the group delay (Credit: Charlot 2007)
Top

2.2.2 For imaging
The two observables used for imaging are the amplitude and phase that result from the correlation process for a given observation. Amplitude and phase form a quantity called complex visibility which can be mathematically related to the brightness distribution of the source. Using such measurements acquired over different times and baselines, it is then possible to reconstruct an image of the radio source. Mathematically, it is possible to demonstrate that the complex visibility (quantity measured by an interformeter) is the 2-dimension Fourier transform of the spatial brightness distribution of the source. This is the Van Cittert-Zernike theorem. By using an inverse Fourier transform, one can then, in theory, reconstruct the image of the radio source from the complex visibility measurements.

Unfortunately, the VLBI technique usually provides a poorly-sampled Fourier plane, also known as the (u,v) plane. Due to the sparseness of the network, the visibility is measured only at a limited number of points of the (u,v) plane ,which correspond to the projection of the observing baselines on the sky, and has undefined values elsewhere. In such a case, the reconstruction process (i.e. the inverse Fourier transform) leads to an incomplete and distorted image: the dirty map. This dirty map is in fact the convolution of the source brightness distribution with the dirty beam, which is the Fourier transform of the sampling function (i.e. the representation of the network in the Fourier domain). This is summarized in the figure below. 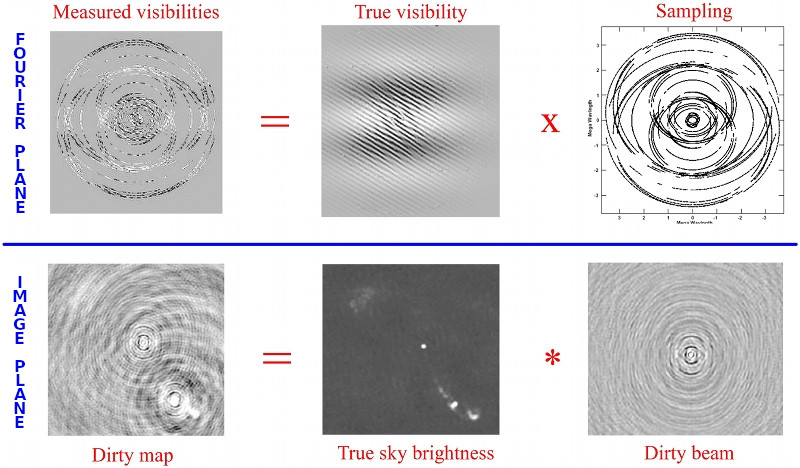 Upper panel: Imaging in the Fourier plane — the visibilities measured by the interferometer are obtained by multiplying the true visibility distribution by the sampling function.
Lower panel: Imaging in the image plane — the dirty map is the convolution of the source brightness distribution by the dirty beam.
Upper and lower panels are related by a direct (or inverse) Fourier transform.
(Adapted from Garrington 2007)
In order to “interpolate” the complex visibility values at the unsampled points of the (u,v)-plane and reconstruct a realistic image, one can use non-linear deconvolution methods, such as the CLEAN algorithm or the Maximum Entropy Method (MEM) incorporating also some physical assumptions about the image (e.g. the sky has always positive brightness, is mostly empty, etc.).

2.3 About the extragalactic radio sources
The celestial objects observed with the VLBI technique are usually very bright and distant active galaxies. These objects possess a tremendous energy which originates from the accretion of dust and gas by a supermassive black hole located in the innermost region of the galaxy. This region is called the Active Galactic Nucleus (AGN). The radio emission is of synchrotron origin and comes from relativistic jets in the inner AGN part.

In all, the different “species” may in fact be related to a single type of physical object observed from different angles (see figure below); this model is called the unified model of AGN. 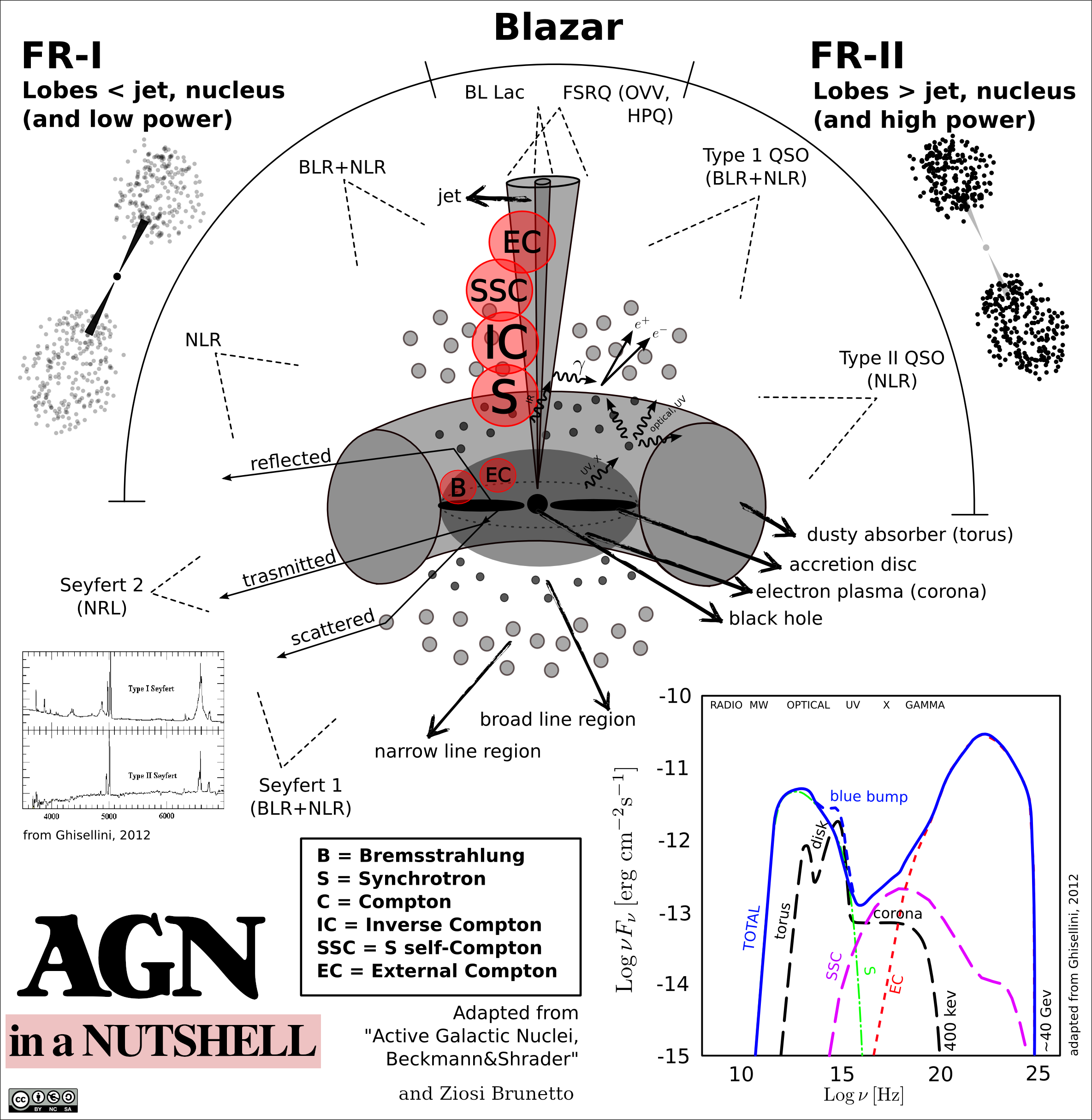 
3. The BVID products
3.1 VLBI images
VLBI images reveal the structure (i.e. the brightness distribution) of the extragalactic radio sources on milliarcsecond scales. Such structures can vary in both time and frequency, and set limits on the accuracy of source positions determined with VLBI astrometry unless their effects are accounted for.

A detailed tutorial about how to reduce VLBI data is available from the Asian Radio Astronomy Winter School 2007. 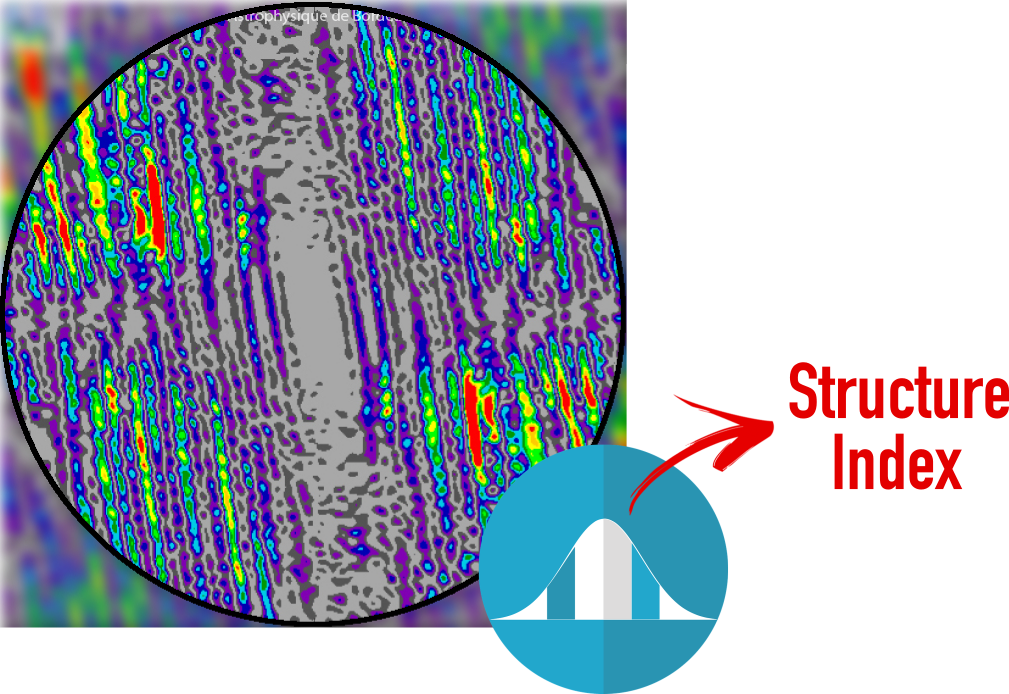 The structure correction maps display the magnitude of intrinsic source structure effects on the basic quantity measured in astrometric/geodetic VLBI, i.e. the bandwidth synthesis delays, as a function of interferometer resolution.

Source structure corrections are derived from the spatial brightness distribution of the source, i.e. the source model underlying the VLBI image. This is done for a range of length and orientation of the VLBI baselines projected onto the plane of the sky, expressed in units of the wavelength (u, v coordinates).

The source structure correction or structural delay is plotted as a function of u, v coordinates (expressed in million of wavelength) in the structure correction maps. The colorscale for the structural effect in these maps ranges from 0 to 100 picoseconds (ps). All corrections larger than 100 ps are plotted in red (equivalent to the color for the interval of corrections 90-100 ps). The black circle represents the longest baselines that can be theoretically observed with VLBI stations on Earth. The labels on the top of the map indicate statistics of the corrections for all VLBI baselines contained within the black circle (mean value, maximum value, RMS value, median value). 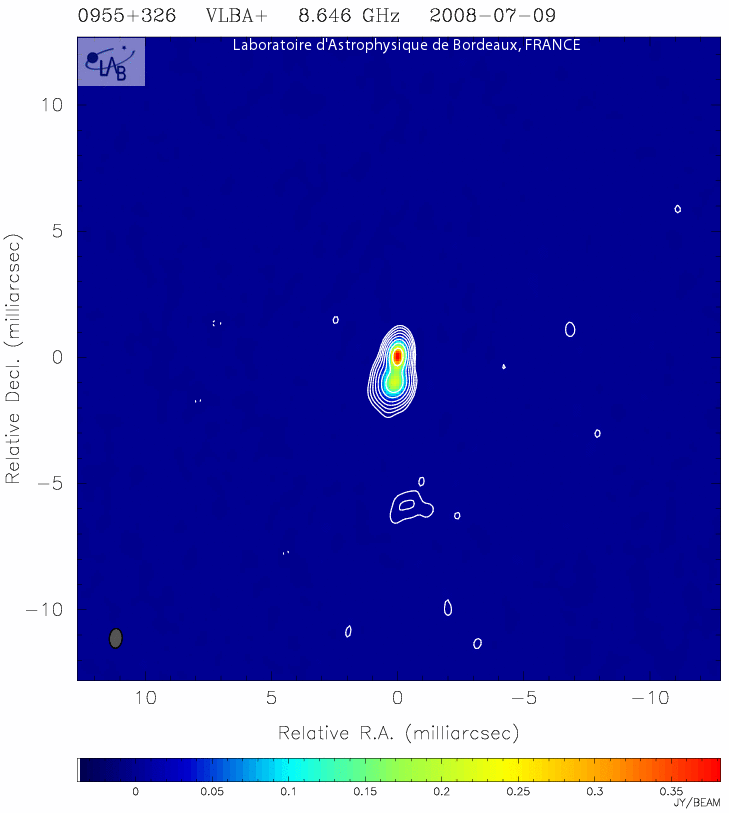 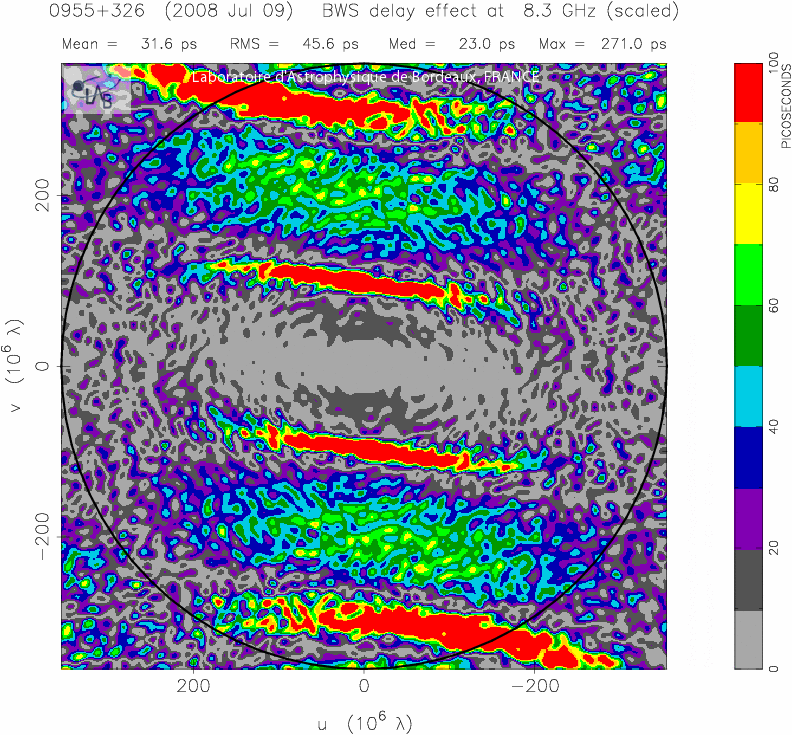 Left panel: Example of VLBI map   Right panel: The corresponding structure correction map
(Credit: BVID)
The structure index (SI) is calculated from the median value τmedian of the structure delay corrections for all projected VLBI baselines that could be observed on Earth as:

where τmedian is expressed in picoseconds (ps).

The above equation show that the SI value increases as the median structural delay effect gets larger. In other words, the SI may be used as an indicator of the astrometric quality of a source: the smaller the structure index, the higher the source quality (see the figure below). Note also that the SI value is set to 0 when log (τmedian) < −0.5 (i.e.   τmedian < ~0.3 ps) in order to keep it positive. 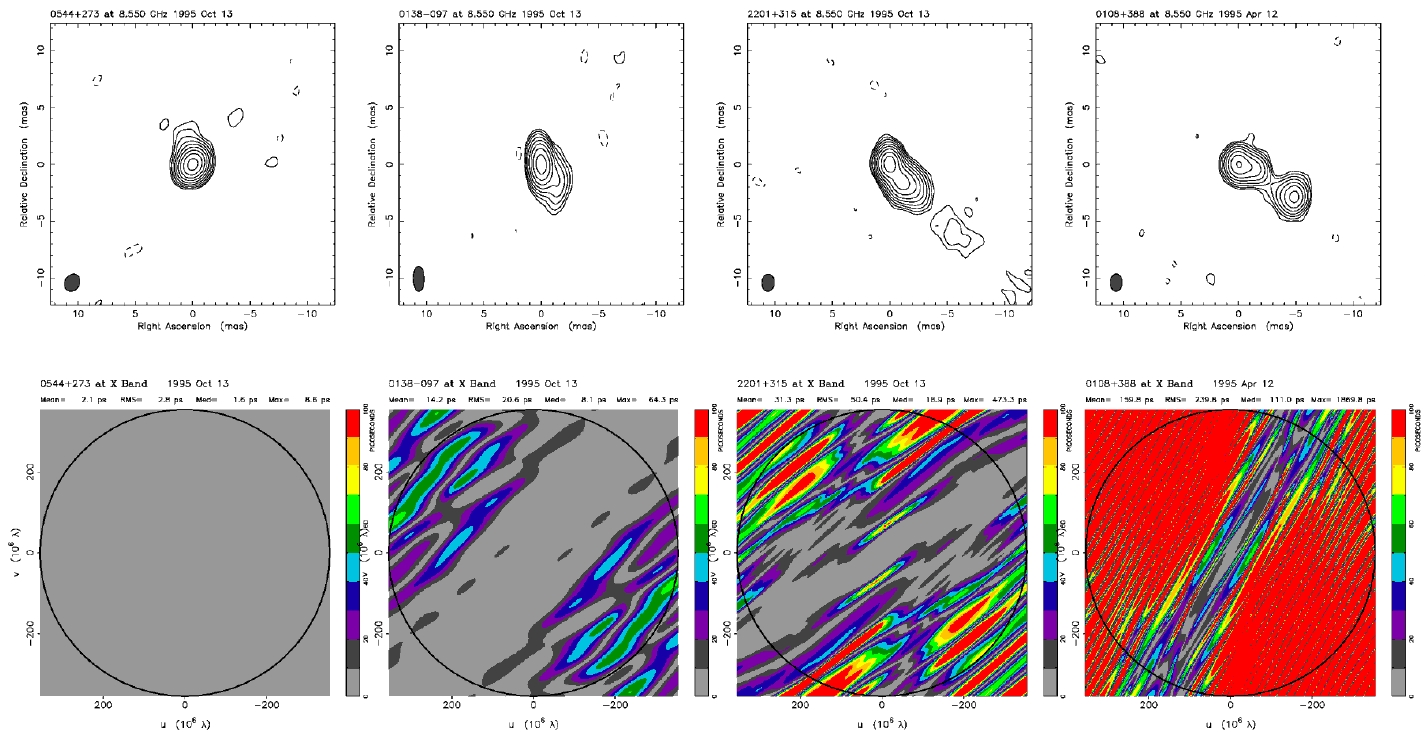 Upper panel: VLBI images at X-band of four sources with a wide range of structure complexity.
Lower panel: The corresponding structure correction maps display the magnitude of the structural delays induced by those structures. The delay (in picoseconds) is plotted as a function of the u, v coordinates. The circle drawn represents the maximum baseline length that can be theoretically observed on Earth. The SI values are 1.35, 2.82, 3.55, 5.08 from left to right, respectively.
(Credit: Charlot 2008)
Further details about the calculation of structure corrections and structure indices are described in: 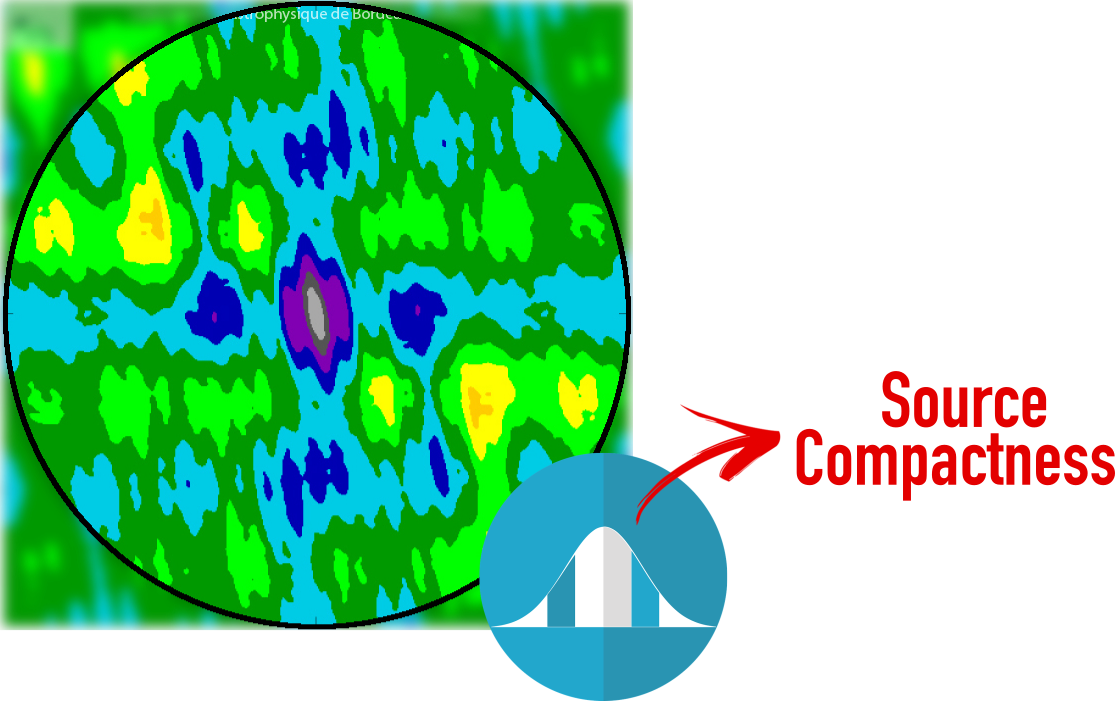 Visibility map (Credit: BVID)
The visibility map displays the values of the visibility amplitude (normalized to 1 using the total integrated flux density in the image) for all possible baseline lengths and orientations on Earth. Visibilities are calculated based on the source model obtained from imaging.
Visibility maps are used to estimate the source compactness and also the correlated flux density for any given VLBI baseline; this can be useful e.g. for scheduling purposes.

The visibily amplitudes are calculated from the spatial brightness distribution of the source, i.e. the source model underlying the VLBI image. This is done for a range of length and orientation of the VLBI baselines projected onto the plane of the sky, expressed in units of the wavelength (u, v coordinates).

The visibility amplitudes are normalized to 1 using the total integrated flux density in the image. As for the structure correction map, the black circle represents the longest baselines that can be theoretically observed with Earth-based VLBI. The labels on the top of the map indicate statistics of the visibility amplitudes for all baselines contained within this black circle (mean value, maximum value, RMS value, median value). 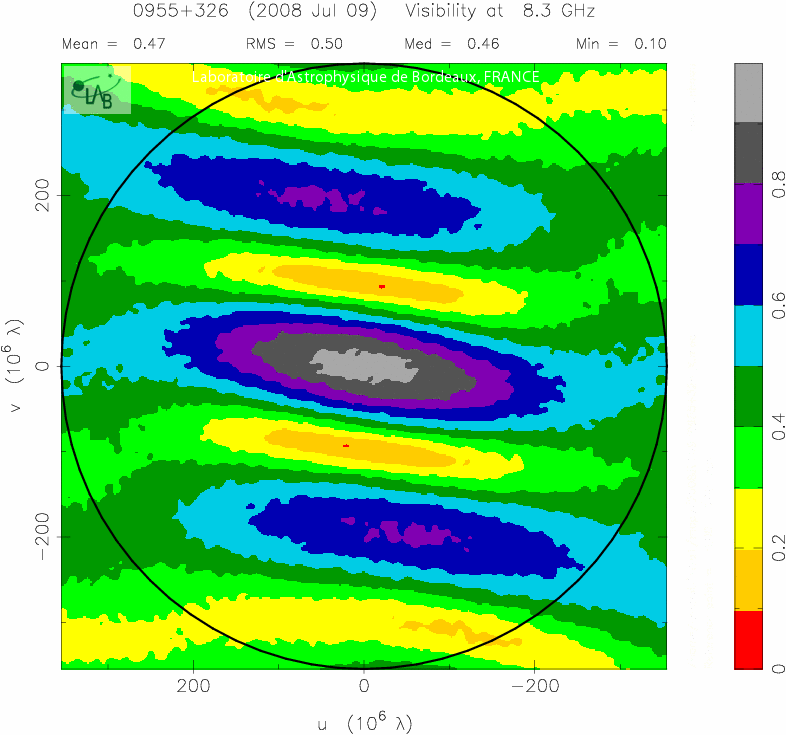 Left panel: Example of VLBI map   Right panel: The corresponding visibility map
(Credit: BVID)
The source compactness is the median value Vmedian of the visibility amplitude values for all projected VLBI baselines that could be observed on Earth.

Further details about the calculation of visibility maps and source compactness are described in: Charlot, Proceedings of the fifth IVS General Meeting: Measuring the Future, 345, 2008 (Pdf file